Oslo wants an alternative route to the dangerous voyage around Westkapp for freight and passenger ships, so it is constructing the world’s first ship tunnel. This mega-project requires a 1,700-meter long tunnel to be excavated through the mountainsides of the Stad peninsula.

Norway’s most dangerous waters: 33 deaths in the last 60 years 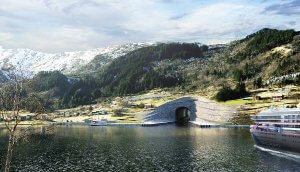 An image of the planned tunnel entrance. © Norwegian Coastal Administration/Snøhetta

Even an experienced captain can become nervous when guiding a ship into the rough seas around the Stad peninsula in western Norway: They are considered to be the most dangerous stretch of water along the country’s entire 25,000 km coastline. The country’s records show that 46 ships have sunk around the western tip of the peninsula in the last 60 years, leading to the deaths of 33 people.
There are many reasons why the seas around Stad peninsula’s western end are so rough. The seafloor has unusual features, which gives rise to strong currents in addition to waves which crash into each other from different directions, a phenomenon known as “cross sea”. The region is also affected by extreme winds on about 100 days a year. Combined, they make the route between Bergen and Ålesund difficult even for experienced mariners. One solution would be to excavate a safe passage through the rocks of the mountains.

The Norwegian government is planning a gigantic infrastructure project that will provide freight and people with safe passage en route to North Cape. Costing some NOK 2.3 billion, or approximately EUR 252 million, the Stad Ship Tunnel will be dug through the narrowest point of the Stad peninsula, connecting Moldefjord with Vanylvsfjord. As it would measure 1.7 km in length, the tunnel will require the excavation of some 7.5 million tonnes of rock. The plans envisage a passage 49 meters high and 36 meters wide, with a channel 12 meters deep.

It would be capable of accommodating a ship with a superstructure some 35 meters high and a draft of 10 meters. According to the government’s plans, this would include freighters with a capacity of some 16,000 gross register tonnes. Oslo expects the tunnel to be used by some 70-120 ships daily.

A massive infrastructure undertaking with no resistance 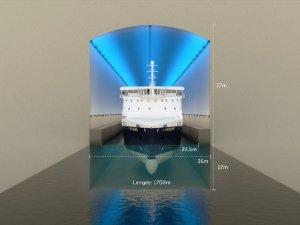 Everything about the project is on a huge scale: The tunnel will be 1,700 meters long, 49 meters high and 36 meters wide © Norwegian Coastal Administration/ Appex

Norway’s tourism industry is expected to benefit the most from the plans for the tunnel through the mountainside, as this connection lies on the route linking two of the country’s biggest tourist centers – Bergen and Ålesund. Even the ships of the famous Hurtigruten lines, which ferry tourists from Bergen to the Russian border in the far north, will be able to use the tunnel. The dimensions of the project are based on the size of these ships, which can carry up to 1,000 passengers.
However, the unique tunnel will also benefit the inhabitants of Norway’s islands, as it would make it easier to get to and from the mainland, where many of them work, by shortening the route and making it safer.

“Sail straight through the mountainside: Norway is planning an infrastructure project like no other in the world. Ocean freight“

Even environmentalists have few objections the massive project: They state that though the undertaking represents a massive intervention in the local environment, it will nevertheless make shipping safer. This ultimately benefits the region’s flora and fauna, as it reduces the risk of shipwrecks and, with it, the danger of environmental contamination.

There is one last issue for the construction companies to solve before work can begin as scheduled in 2018: What exactly will they do with the huge quantities of rock from the tunnel? 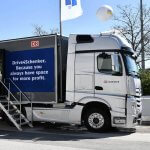 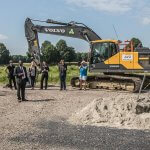