Taking the leap from the North Sea to the future

The port of Rotterdam is Europe’s largest port and is also among the world’s top ten. In 2016 alone, it handled 461.2 million metric tons – 321.2 million tons of which arriving at the Dutch North Sea coast and 140 million tons leaving the port on their journey across the globe. To accommodate this, almost 28,000 seagoing vessels and around 100,000 inland waterway vessels docked in Rotterdam.

“Rotterdam’s container handling operations have performed superbly in a market that is only experiencing limited growth.”

The deep-water port plays an important role in Europe’s energy supply: each year, between 95 and 100 million metric tons of crude oil are brought to Rotterdam, principally from the Middle East, the North Sea and Russia. Some of this is taken to the refineries in the harbor area, while the rest is processed elsewhere in the Netherlands, Belgium and Germany. For coal transshipment too, the port of Rotterdam is the most important address in Europe: nowhere else handles more thermal and coking coal than here. A proportion of this is utilized by the four coal-fired power plants at the port. What remains makes its way to blast furnaces and coal-fired power plants in Germany, France, Belgium and the Netherlands.

In terms of container handling too, Rotterdam has made strong gains – and in doing so has established itself as a serious competitor to Hamburg, Antwerp and the JadeWeserPort. In 2016, it grew to 12.4 million TEU – and recorded a further rise of 8.8% in the first quarter of 2017. “For container handling, this was the best quarter ever, and March was a real record month,” states Allard Castelein, CEO of the Rotterdam Port Authority. “Rotterdam’s container handling operations have performed superbly in a market that is only experiencing limited growth.” Routes to America in particular recorded an increase in 2016, but so too have the western European feeder services.

Maritime trade has a long tradition in Rotterdam: goods have been handled here since as early as the 14th century. Today, around 175,000 jobs are directly dependent on the port, which, with an added value of more than 20 billion euros, makes it responsible for around 3 % of the Netherlands’ gross national product.

And this is also set to continue into the future – for example in the new port and industrial area “Maasvlakte 2”, which covers an area of around 2,000 hectares and has been under construction on a man-made island since 2008 at a cost of around three billion euros . But investment in increased capacity is not the only way in which the port of Rotterdam wishes to retain its crown – the Dutch are also focusing on state-of-the-art IT to enable them to keep pace with the latest developments in logistics: since the end of 2016, the port has been part of the blockchain initiative alongside ABN Amro, Delft University of Technology and the Netherlands Organisation for Applied Scientific Research. The partners are aiming to test how blockchain could be used to share logistics and contract information.

As the Dutch are well aware, only those get to grips with the digitalization of the ocean freight industry will be able to successfully position themselves in the global supply chain for the future.

Transparency thanks to blockchain
Blockchain is a distributed database in which individual transactions are stored in blocks one after the other – as in a chain. The method is tamper-proof and came to global prominence through the cryptocurrency Bitcoin. Logisticians are looking to use the technology to track the status of a delivery, for example. In addition to the port of Rotterdam, shipping company Maersk, the Emirate of Dubai and the Walmart Corporation, to name but a few examples, are also putting their trust in blockchain.

Axel Novak Axel Novak is a freelance journalist in Berlin. For more than a decade, he has been involved with the logistics industry and its changes. Axel Novak writes articles for newspapers, for magazines, and for companies.
Summer break for Formula 1 Teams « 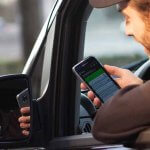