Investment in growth – Antwerp is a success story

It’s not yet been three years since Antwerp surpassed Hamburg. In 2015, the Belgian port overtook its competitor on the Elbe in terms of container handling for the first time. Since then, it has been able to hold on to its position: in the global port ranking, Europe’s second-largest seaport is now 15th – three places ahead of Hamburg

The port has made strong gains, particularly in recent years. In 2016, 10 million TEU standard containers were handled on the Scheldt – 4 % more than in the previous year. The port has also got off to a good start in the first quarter of 2017: 54.3 million metric tons of goods were handled between January and March – 1.5% more than in the same period last year. Container handling grew to around 29.8 million metric tons – an increase of 0.7% when measured in TEU. “The Antwerp Port Authority is delighted with these growth rates,” states CEO Jacques Vandermeiren. “After we achieved better figures in the first half of 2016 than in the second half of the year, it is important for us to see that handling in the container sector is continuing to experience constant growth. This positive trend confirms the need for further container capacity at the Port of Antwerp.”

Just like Hamburg, Antwerp lies inland, far from the coast. Yet thanks to a great of deal of investment, the port has been able to anticipate growth – for example, with the construction of the world’s largest lock. Since 2016, even the world’s largest container ships have been able to pass through the Kieldrecht lock and swiftly navigate the Scheldt to reach the terminals in the Waasland port dock. The new construction took five years and an investment of 382 million euros from the port authority. The lock is so important for the region that even King Philippe of Belgium attended its opening.

This is not the only project that is helping to put Antwerp on a solid footing for the future. In particular, the port has received plaudits for its cluster concept for the chemical and petrochemical industry. Seven of the world’s ten biggest chemical producers and four oil refineries are represented in Europe’s largest integrated chemical cluster. What’s more, the port is now set for further expansion. Investors are pumping more than 650 million euros into new terminals, for example into a new tanker and a new container terminal at the Delwaide dock. At the Hansa dock, a terminal offering additional tanker capacity for oil company Total is being constructed. And US terminal operator Zenith Energy is building its second regional site in Antwerp.

When it comes to digitalization too, Antwerp is actively involved in finding ways to simplify processes. “For us logisticians, whether a terminal works efficiently or not is absolutely crucial,” states Tina Kruse, Head of Seafreight at Schenker Deutschland. “What is important is that there are processes that speed up the release of containers.” At present, the port authority incorporates systems such as the Barge Traffic System (BTS), which links up those working at the port with those in the hinterland terminals. Systems like these are another factor accounting for Antwerp’s growth. 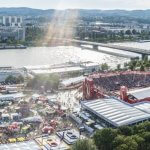