Formula 1 report: How the MERCEDES AMG PETRONAS motorhome is created

Logistics in Formula 1 involve more than just transportation. DB SCHENKERsportsevents takes over many value added services – such as building the motorhomes – for the MERCEDES AMG PETRONAS Formula OneTM team.

The transportable modular buildings serve as hospitality areas for the Formula 1 teams at the racetracks. Just like the logistics in Formula 1 overall, considerable logistical effort is also put into these, in order for these motorhomes to be ready on time for the two drivers – Lewis Hamilton and Nico Rosberg – their team and their VIP guests for the race weekend.

The schedule is tight, especially if two races are held within a week – like the Grands Prix in Hungary and Hockenheim. In this case, the motorhome needs to be dismantled within the shortest time possible, loaded up and transported to the next location where it is to be used. As soon as it arrives on site, 18 logistics professionals – working across several shifts – begin the 36-hour assembly job.

logistik aktuell travelled to Hockenheim to see the construction for itself at close and to report on the process: 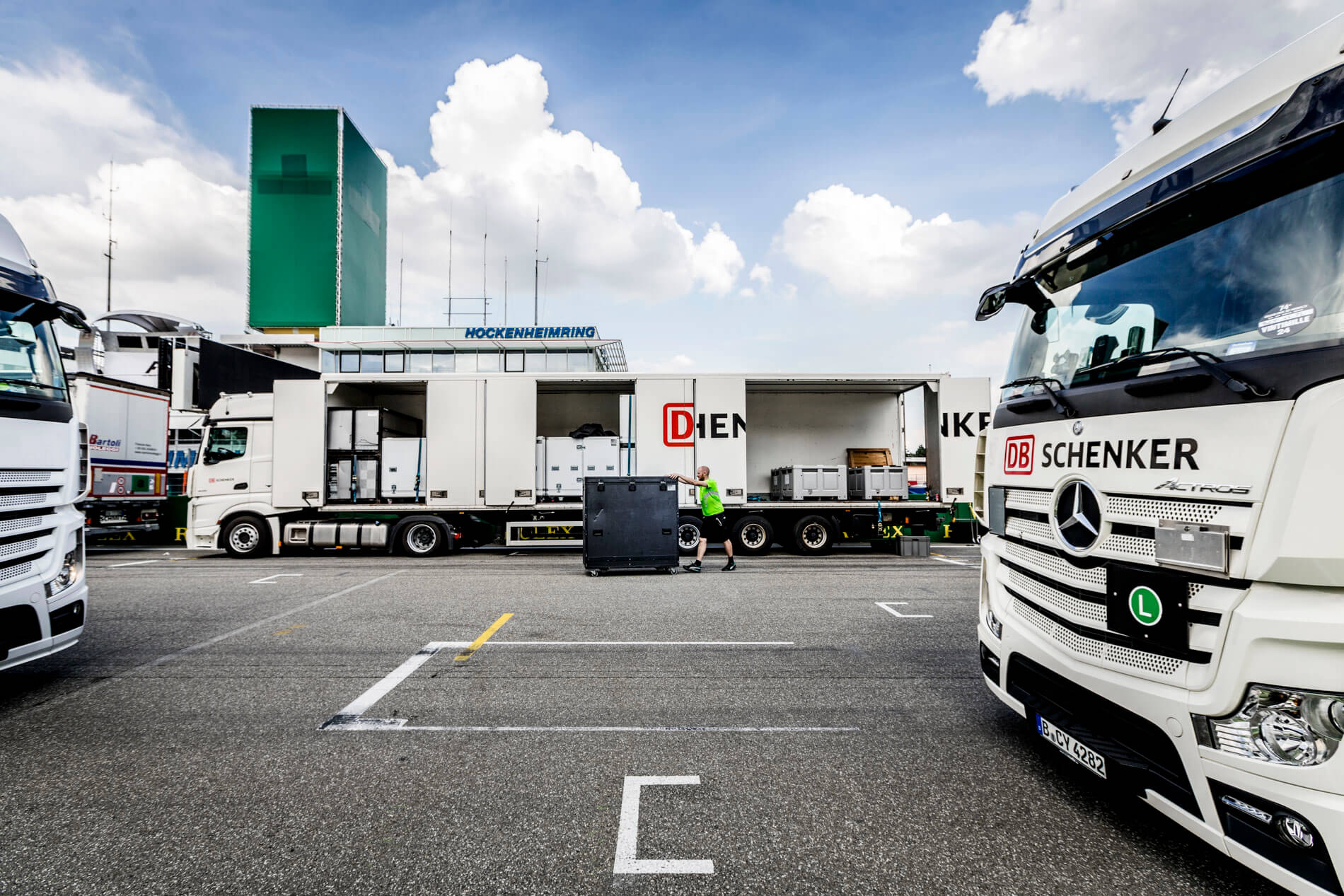 Logistics in Formula 1 have to work smoothly – just like here at MERCEDES AMG PETRONAS and DB SCHENKERsportsevents. The white DB Schenker trucks reach the approach road to the Hockenheimring site right on schedule. The logistics crew is already stood ready to start immediately unloading the equipment needed for the construction. In addition to forklifts, the logisticians’ tools are also included in this. 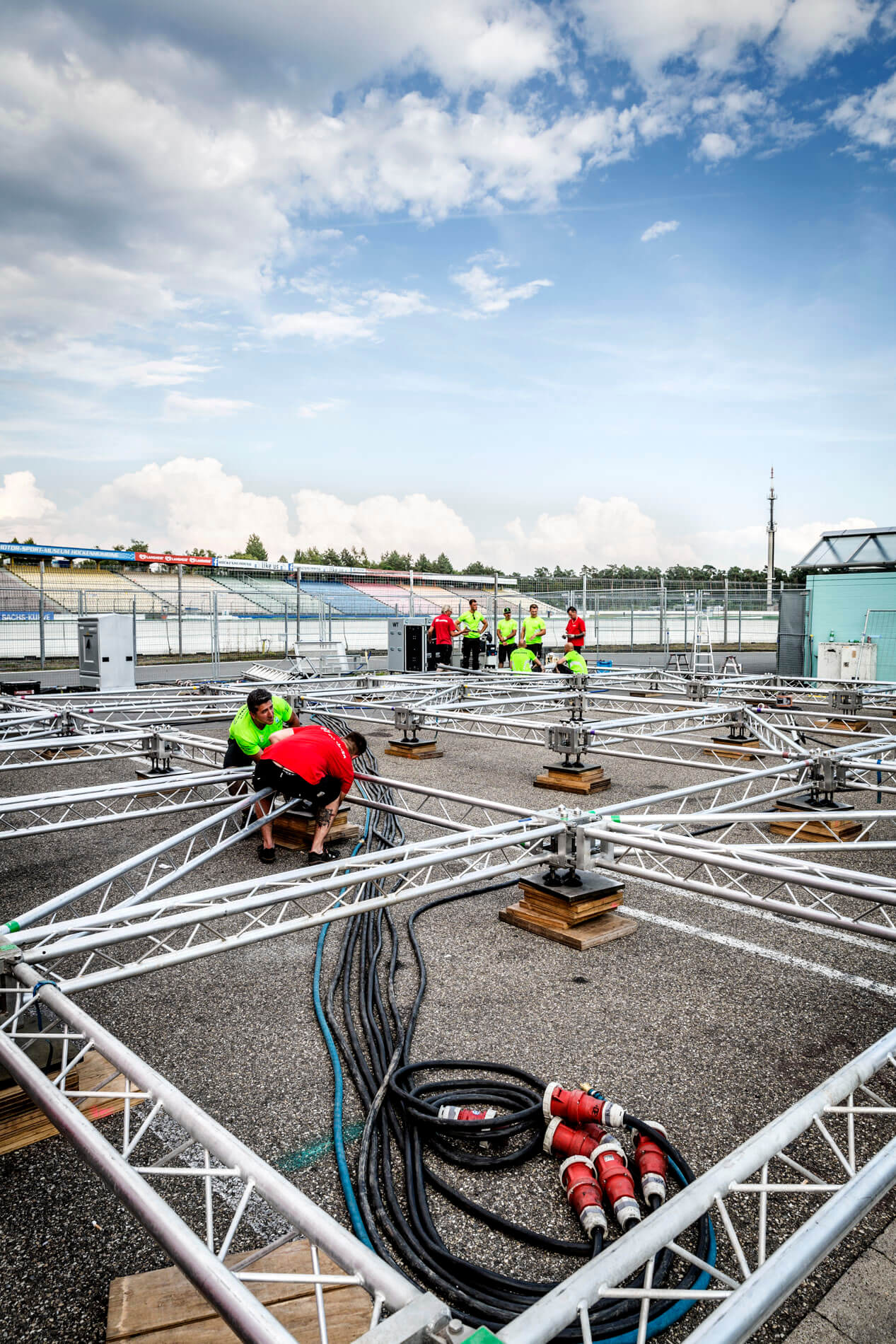 The grid puts the motorhome’s foundations in place. Extreme precision is required here as, should the height of the motorhome’s foundation be just slightly off, then the floors and walls of the modular construction system won’t fit together later. In order to achieve the staircase height of 78 cm, the grid is placed onto special wooden washers. For added safety, the basic frame is tested with a laser measuring device and readjusted where necessary. 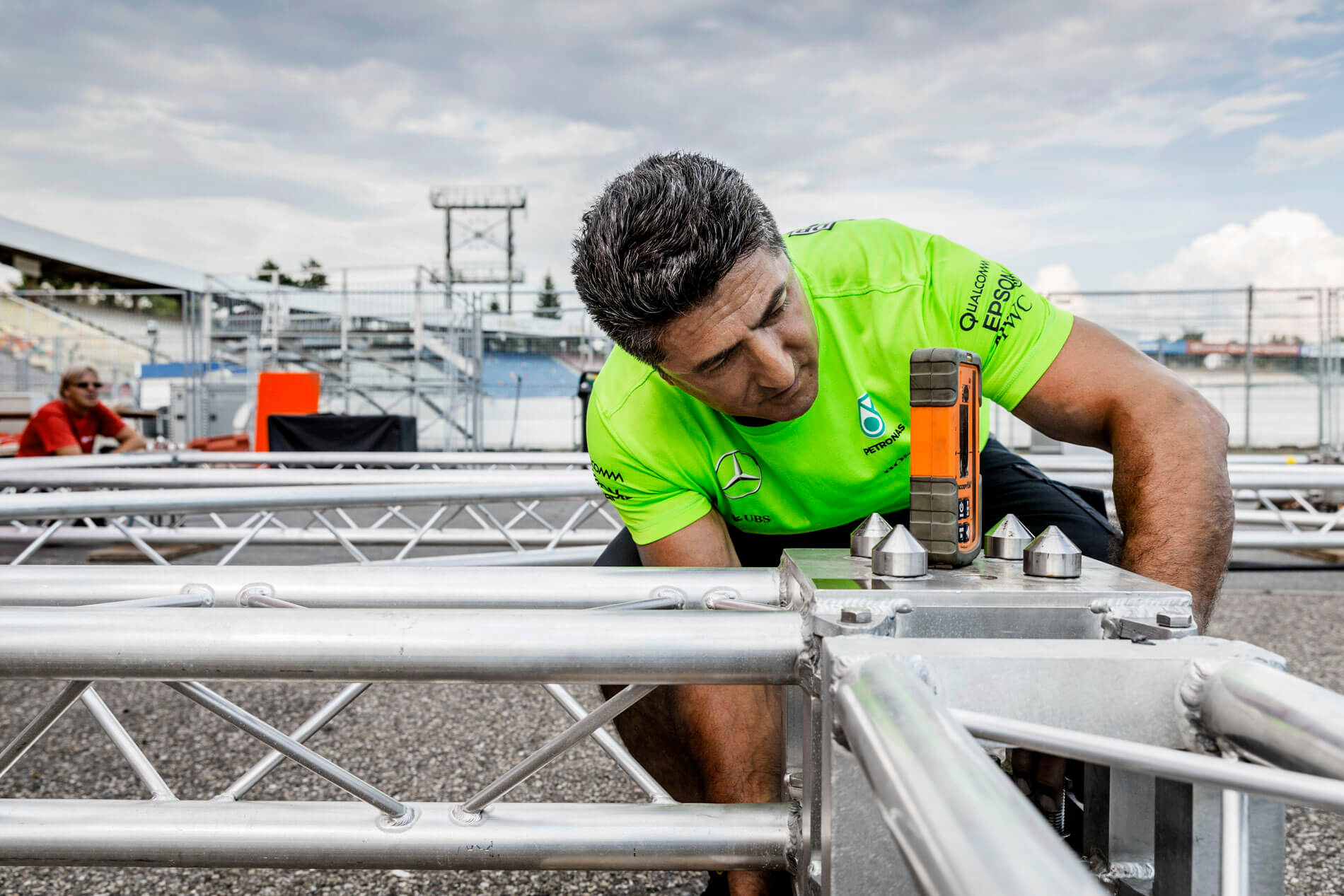 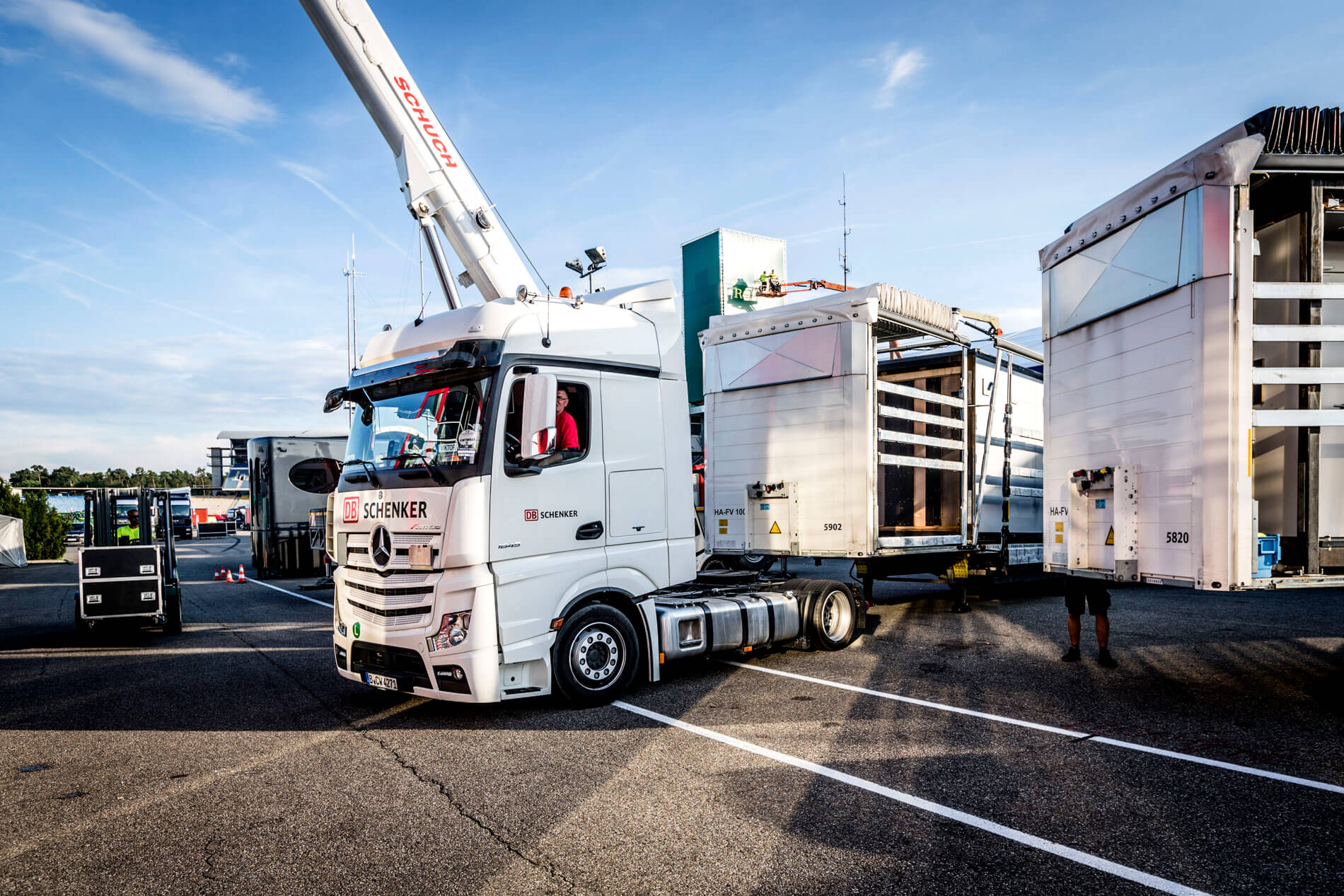 The rental crane is now in position. It is jacked-up and its driver waits for the modules to also arrive. There is plenty going on in the area behind the pit lane as the other teams are also setting up their motorhomes. A little time passes before the first of the white DB Schenker trucks is able to back in. The truck eventually reaches the loading point and the coverings and transport securing devices are removed before the first module can be unloaded. 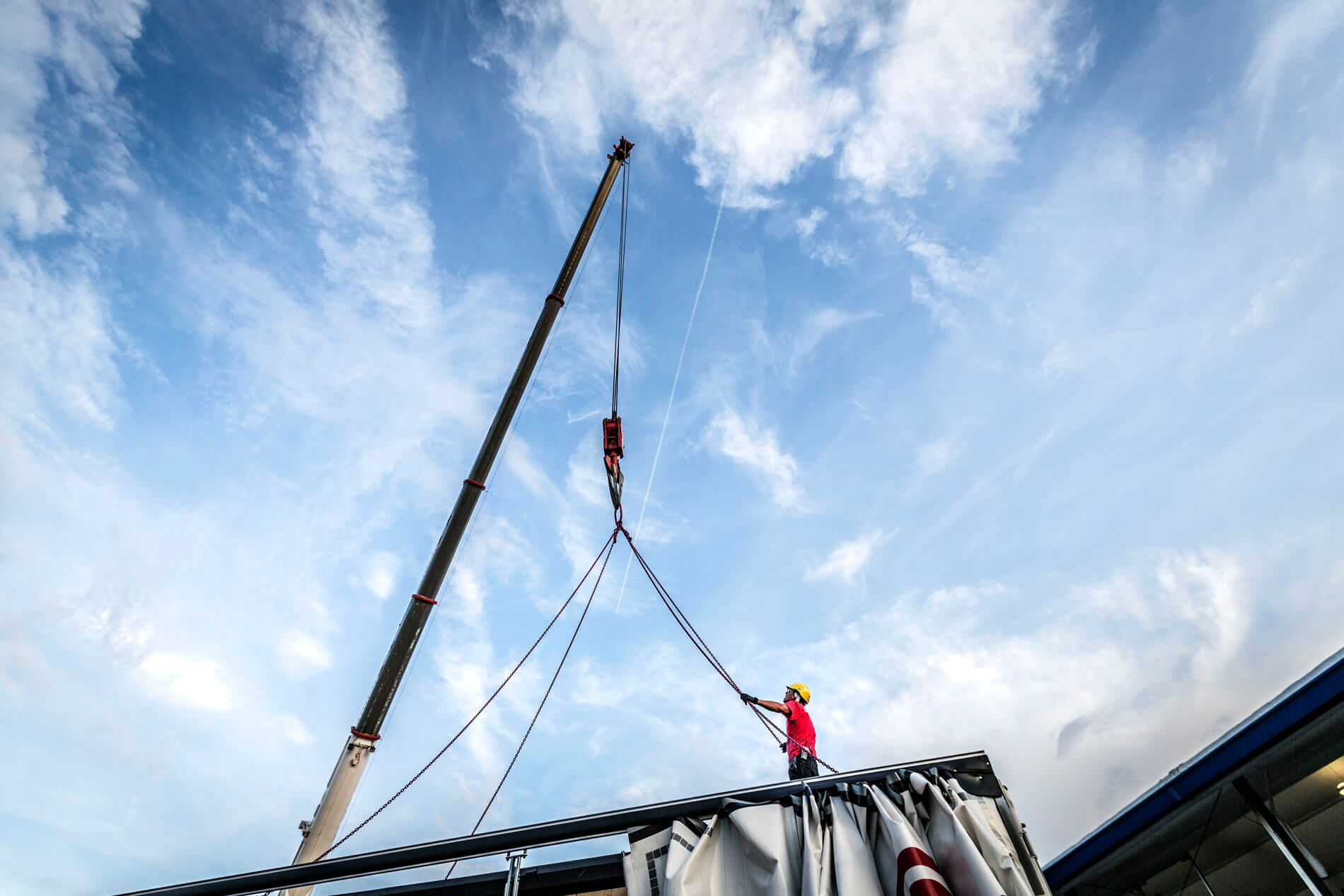 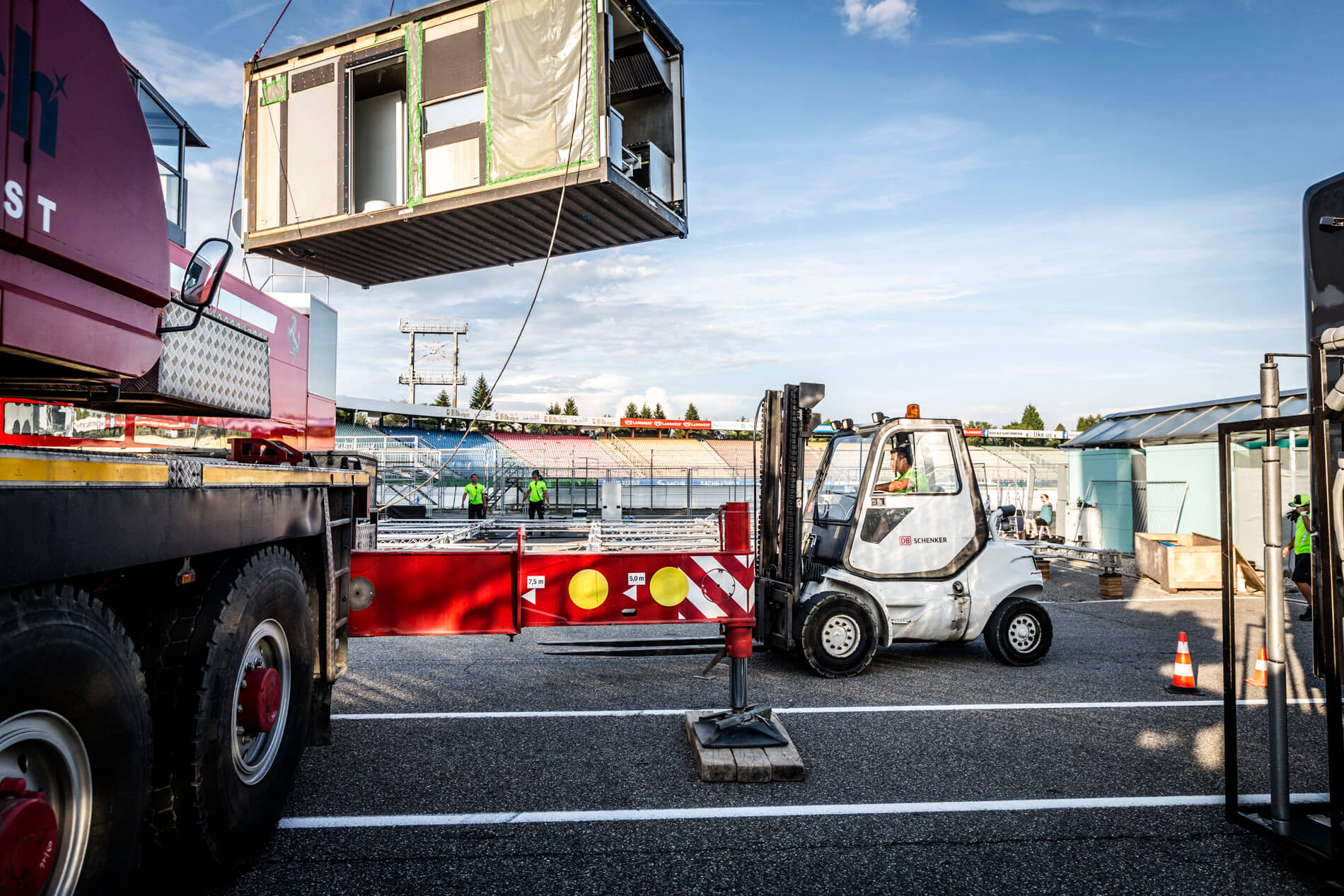 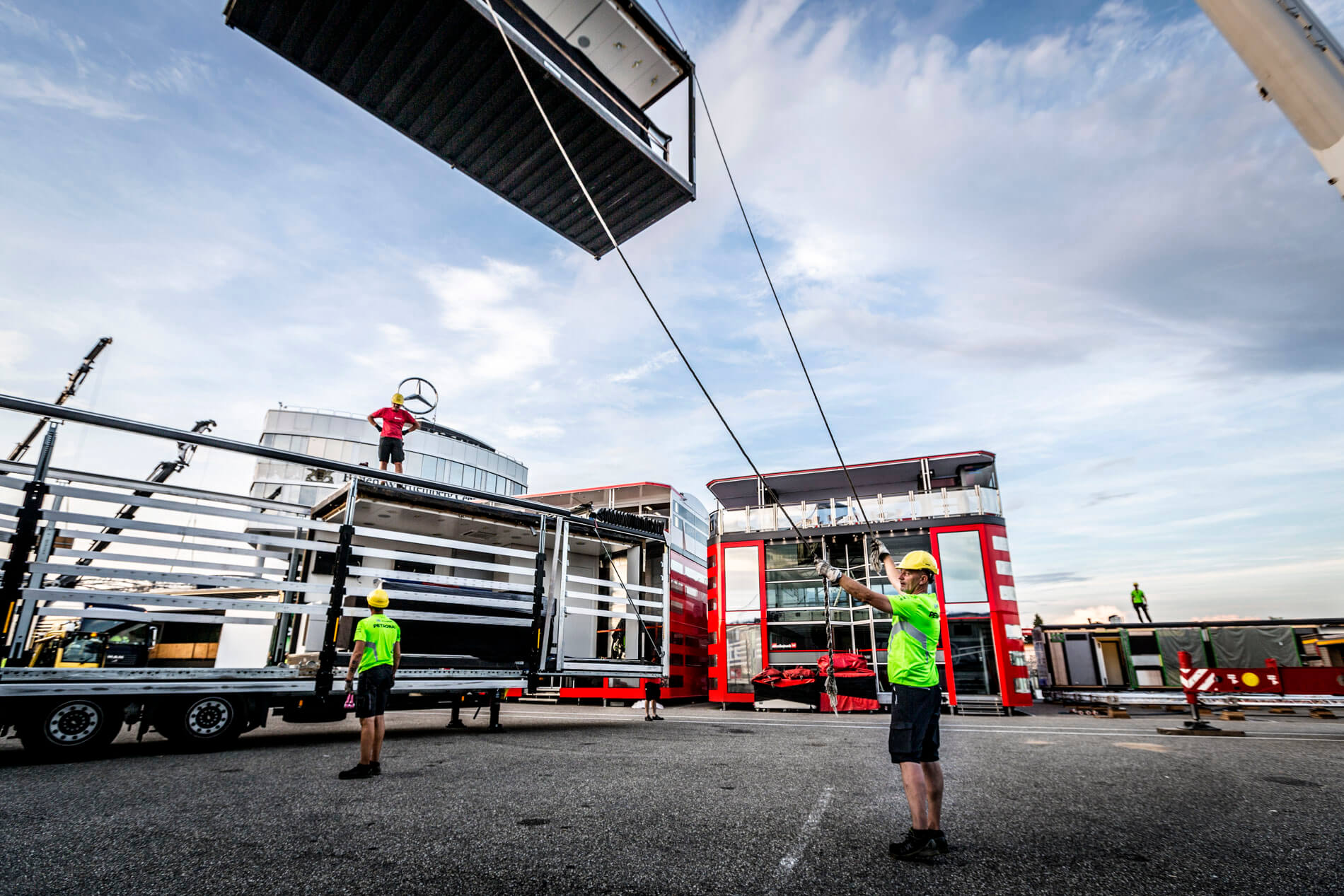 Here we go: The crane is in action for the first time and the kitchen module is guided in. It is positioned at the back right-hand side of the motorhome’s ground floor. Things are progressing quickly now: The next truck is already ready with the second module. This contains the second part of the kitchen and first part of the sanitary facilities.

The ten workers on the first shift are provided with their hard-earned evening meal. About thirty minutes and a cup of coffee later, it’s back to the assembly work though, as there’s still plenty to do. At 2 a.m. the second DB Schenker Team takes over. 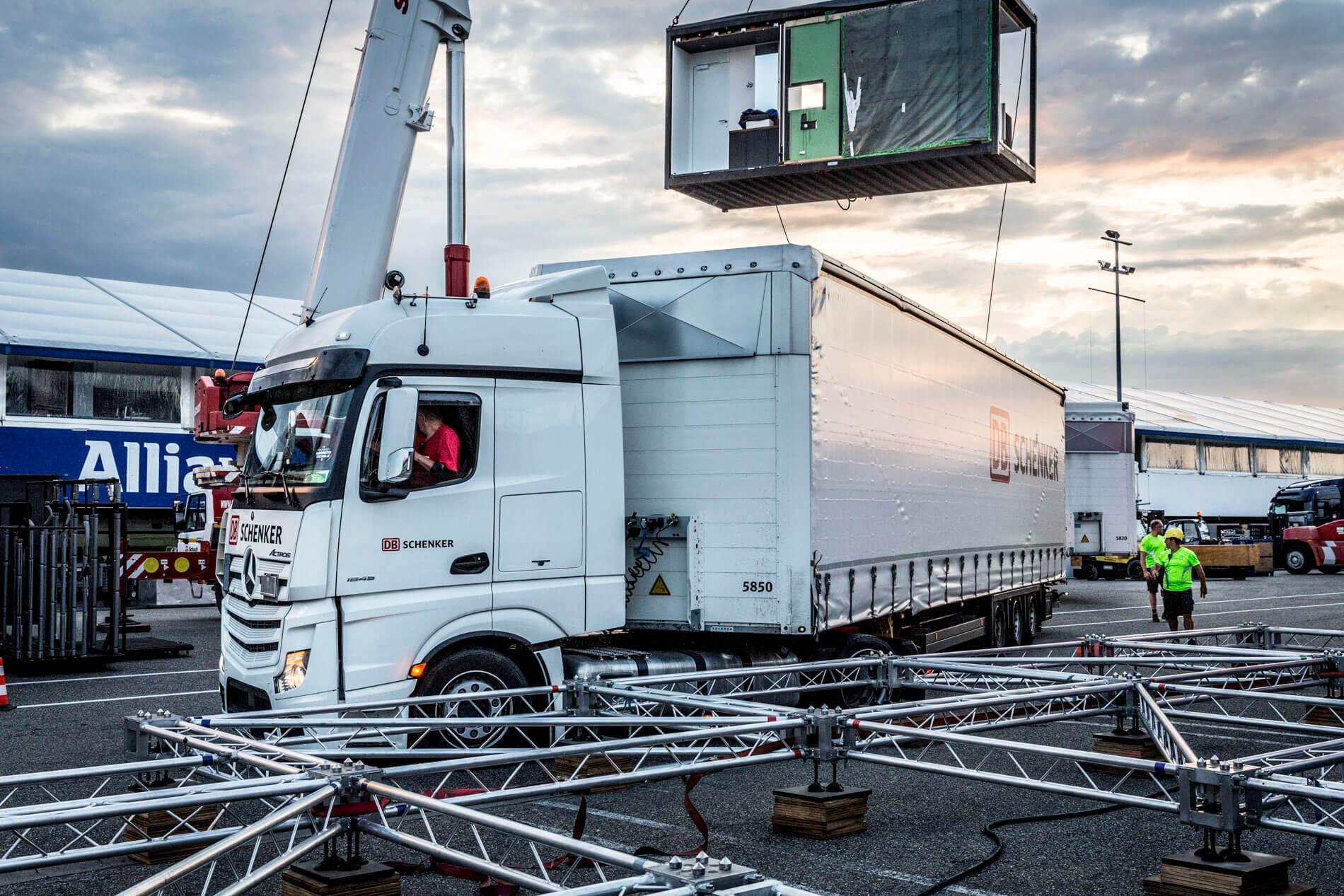 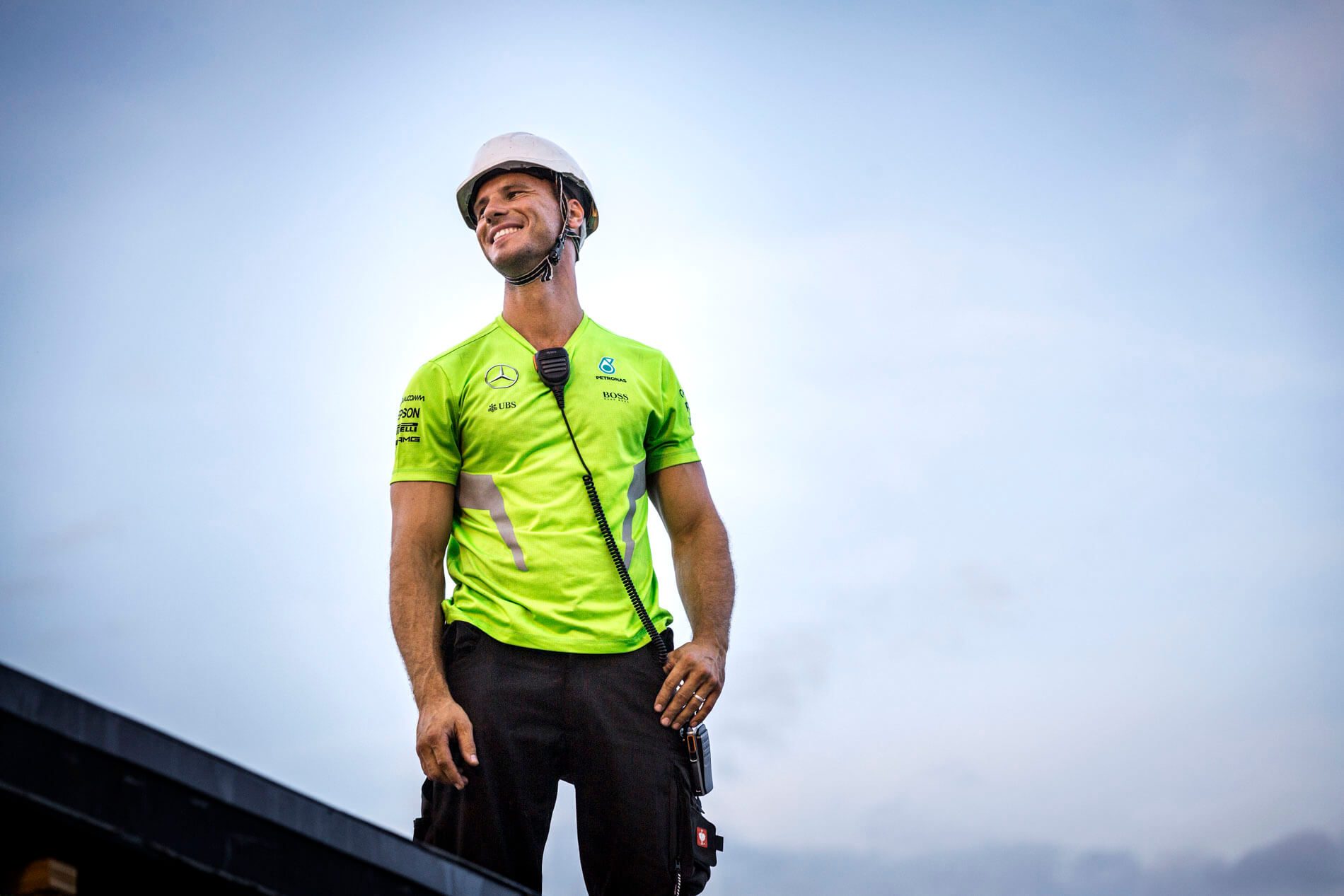 The sun slowly sets behind the main stand at the Hockenheimring and the team starts preparing for the night. Floodlights are positioned in critical places to enable the construction to continue beyond sunset. Meantime, the next module of the motorhome is swung into place. A worker stands atop the roof of one of the compartments already in place and is directing the crane driver by radio. Some of his colleagues are bolting together the parts of the motorhome which are already in place. The operation is perfectly orchestrated – the fitters are a well-drilled team.

The logisticians are getting restless: The next truck hasn’t arrived. The drivers are being quizzed over the radio as to when the supplies can be expected. “Just five minutes, then you can continue!” To avoid risking a delay, two team members head off to the parking area to fetch the next HGVs. 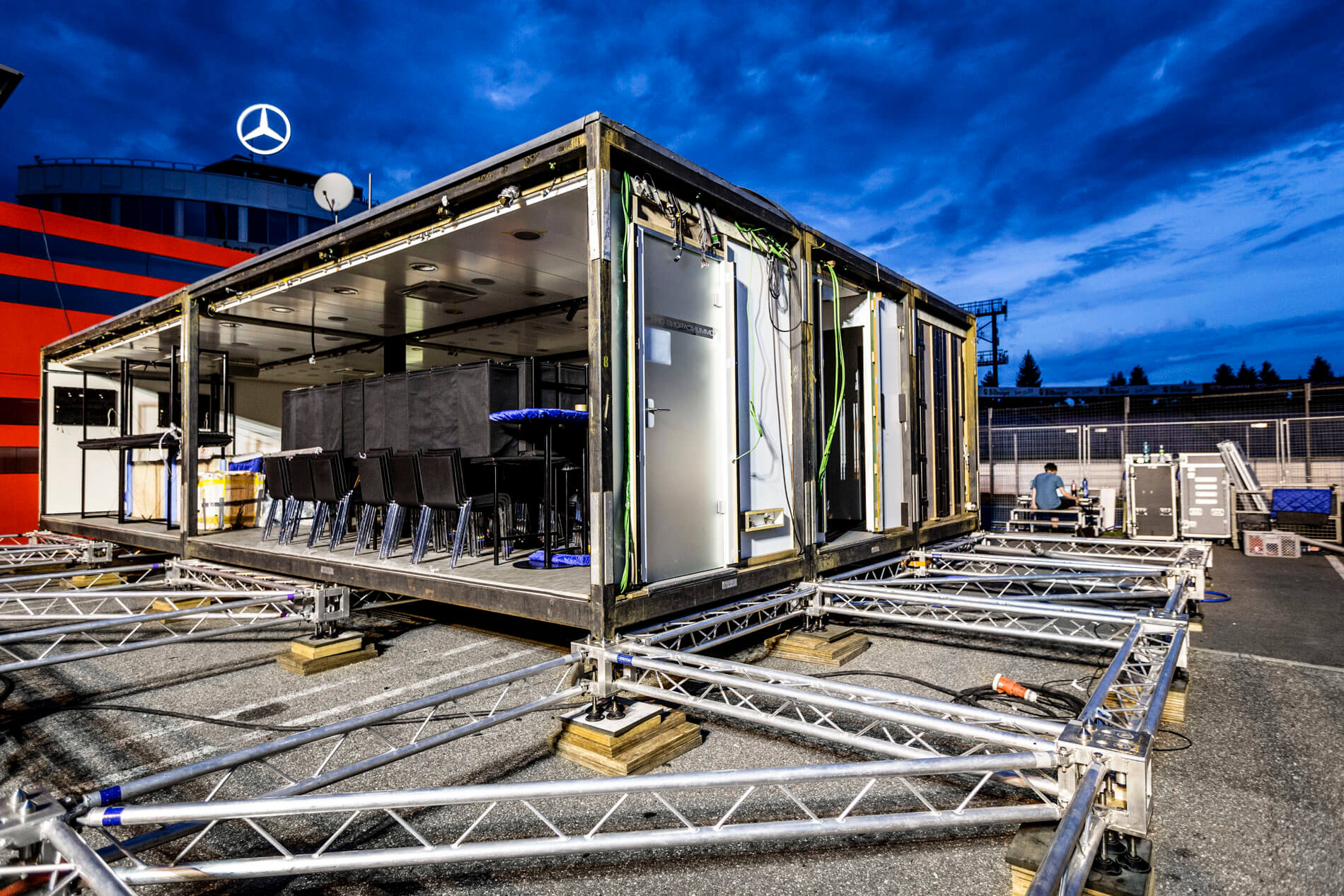 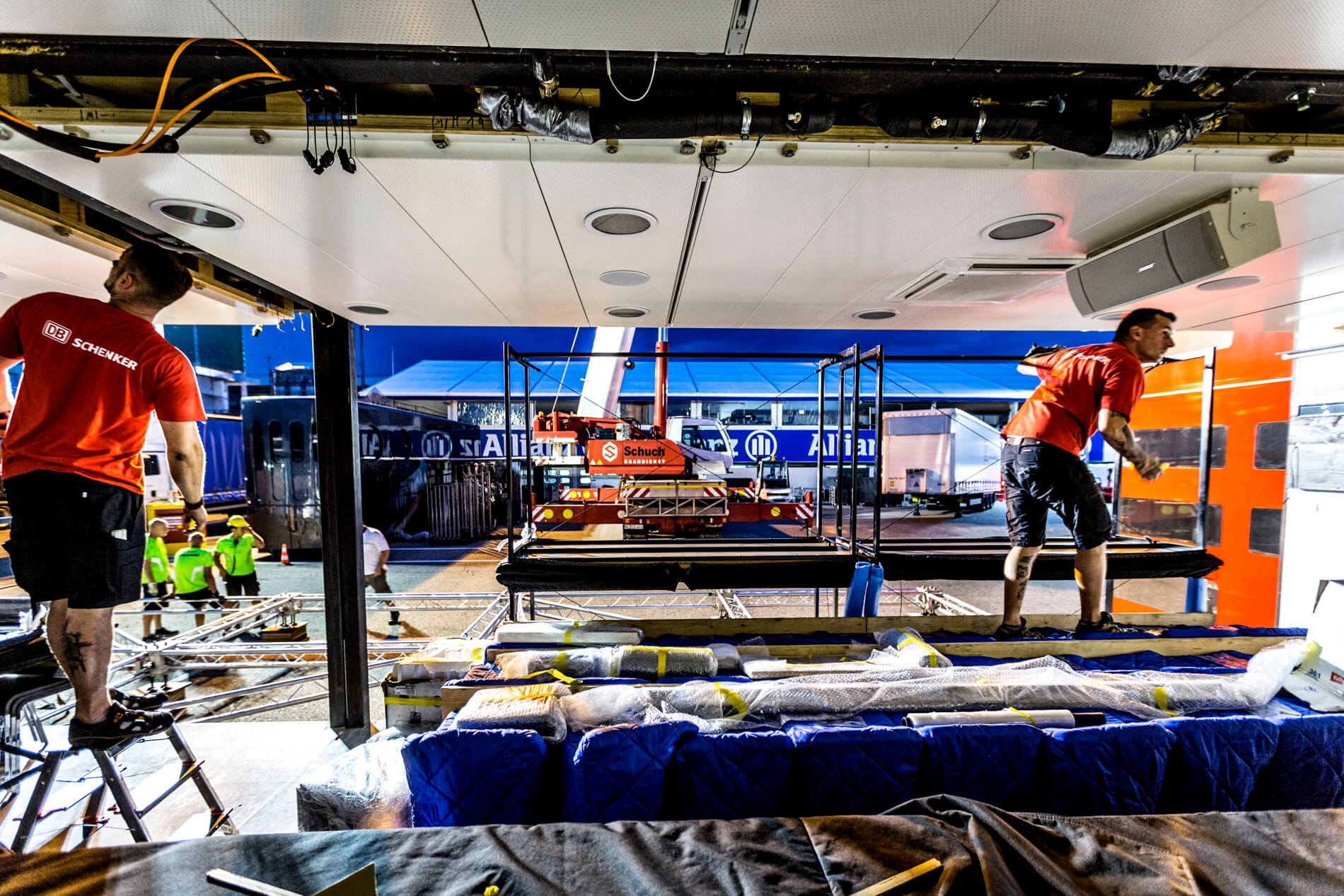 Now things are moving. The modules keep coming, the motorhome is growing. The logistics professionals reckon it will take around half an hour to set up two modules which are being transported together in a truck. The ground floor is already finished. The Formula 1 logisticians’ schedule is still right on time. In the meantime, the technician in the motorhome has started cabling the ground floor. Power, TV and IT cables are run along the ceiling, which will be plugged together at the interfaces between the modules. He also connects the hoses for the air-conditioning system. 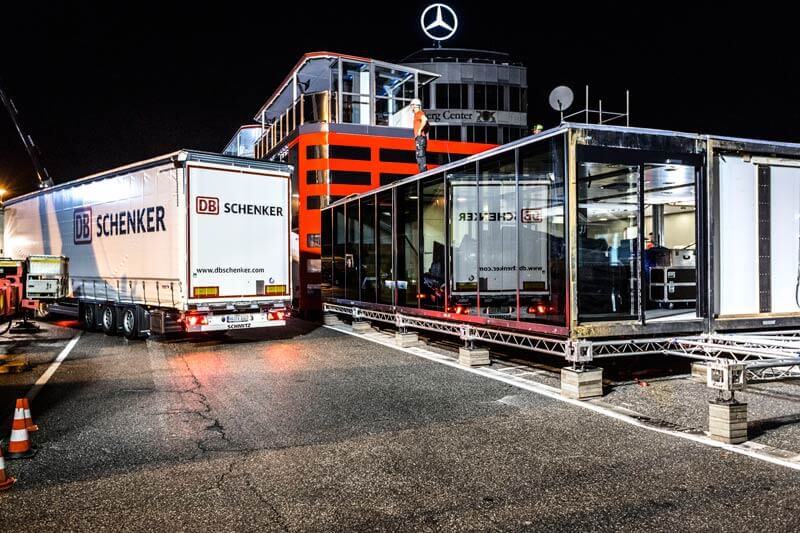 The final container of the ground floor has reached its destination and the next HGVs are already ready to be unloaded. Things progress seamlessly with the modules of the upper floor. The office of MERCEDES AMG PETRONAS team chef Toto Wolf is in the first container of the second floor. 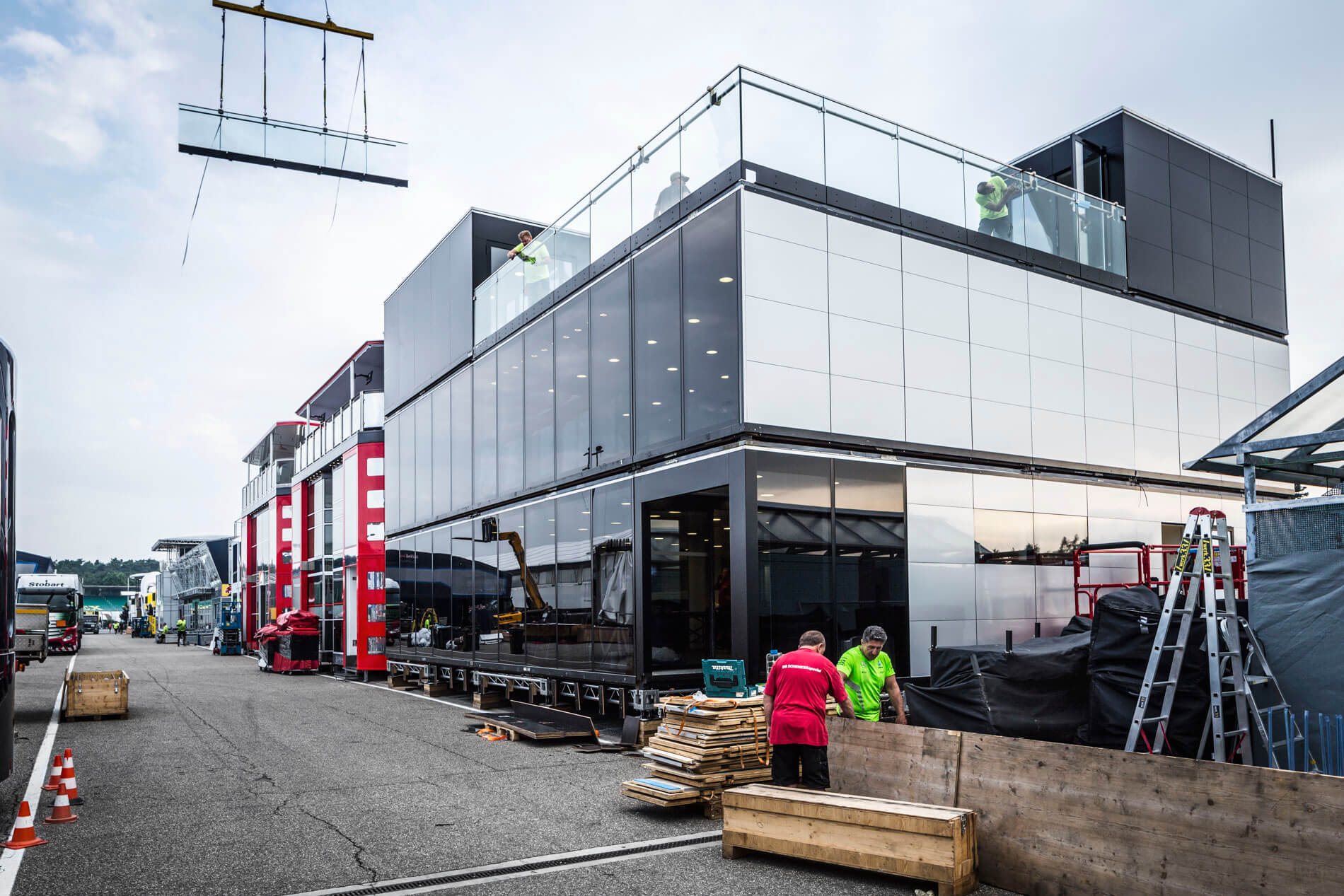 The staff from DB Schenker have finished their nightshift according to the plan and the motorhome has grown ever taller. Shortly before 6 a.m., the final module of the hospitality home is put in place. The basic structure is ready – two hours ahead of schedule! 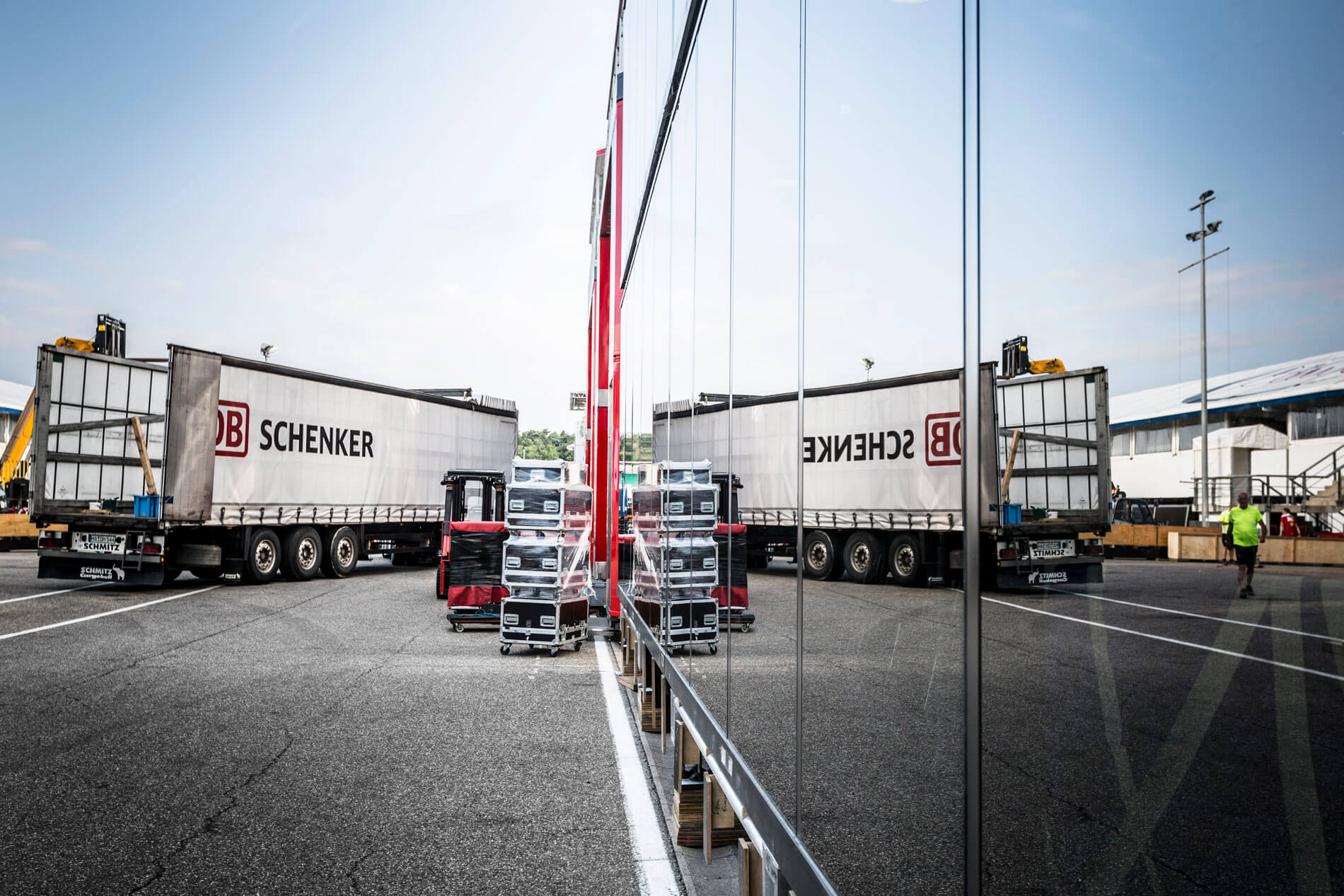 And things are also progressing inside: The air-conditioning and lighting for the motorhome have already been working for some hours. That makes the work easier for the installation team. In addition, the fittings are constantly arriving – from the tables and chairs to the flatscreens which are installed in almost every room in the motorhome. Many of the screens are already hanging on the walls, showing the logo and press images of MERCEDES AMG PETRONAS. Gutters and glass balustrades are being installed on the roof of the motorhome. A terrace with a barbecue kitchen, bar and seating areas is being created. First of all, though, the surface of the roof is decked with a waterproof covering and then wooden flooring is laid. With the help of a hoist, the DB Schenker workers also attach screens around the motorhome to create a uniform look.

Fittings keep arriving at the motorhome in shipping crates. A few groups of tables are set up on the ground floor. Come race weekend, the press conferences will be held here and the journalists be taken care of here.

One floor up, the VIP area is taking shape. A bar is being assembled and several seating corners arranged. The offices for marketing and the team management of MERCEDES AMG PETRONAS are also located on the first upper floor.

“@F1 at #Hockenheim: We were there as the @MercedesAMGF1 motorhome was assembled. #DBSchenker“

It will take until the early hours for the DB Schenker logisticians to get the motorhome arranged to the wishes and specifications of the Formula 1 team. However, now that the jigsaw puzzle of the modules has been accurately completed, the logistic professionals’ biggest worry is over. As the motorhome’s glass facade is polished to a bright shine, everything that’s left to do is simply business as usual for the experienced DB Schenker Team. What goes into planning the Olympics « Platooning on the A9 freeway: Driver assistance systems are becoming increasingly independent in their actions »