Ship elevator completes Three Gorges Dam. What does it do for China’s hinterland?

The Three Gorges Dam, which backs up the Chinese river Yangtze near Wuhan City, has, as its crowning piece, received a ship lift last year. The world’s largest, of course.

Yesterday, it was Rotterdam, and Hamburg before that. What is currently the largest freight port in the world? Shanghai!

The ship lift, which was opened in the autumn of 2016, can lift small to medium-sized ships, mainly passenger ships, with a displacement of up to 3,000 tonnes to the reservoir level. The distance traveled is 113 meters. The ship lift takes no more than 40 minutes to transit. It lifts the basin including water and mechanics with a total weight of 15.500 tonnes. As with any elevator, this is achieved by using counterweights.

In 2003, a complete re-planning of the lifting mechanics was necessary, including cable to gear. German engineering companies were entrusted with the planning of the new lifting mechanics. The two-lane five-lock chain-like climbing stairs, on the other hand, have been able to transport ships since 2015 at maximum capacity. However, a ship requires three to four hours to travel through the lock chain.

With the opening of the ship’s lift, the mega-construction project “Three Gorges Dam” was officially completed. While the construction progress of the dam was being followed with great interest also by Germans, the final completion of the project was hardly noticed here. The fact that the dam opens up new and, until now, unthinkable possibilities for transportation is little known.

Since ancient times, Chinese people liked building big. Also, as far as infrastructure and waterways are concerned, China has always had a thing for construction projects in XXL, such as the Grand Canal, the longest artificial waterway in the world.

The construction of a dam to tame the waters of the Yangtze River is an old Chinese dream. Yet, there are many concerns about a building of such size, since its impact on the environment and the resulting consequences remain unclear.

However, there are also many reasons in favor of the dam: damming regular floods and droughts, the world’s largest hydroelectric power station, as well as rendering the Yangtze River navigable for shipping above the barrage. Especially the last point is of central importance for the economic development of the Chinese hinterland.

Hong Kong: Home to the largest freight airport in the world | logistik aktuell

Part one of our series looking at mega-infrastructure projects is dedicated to the world's largest freight airport, Hong Kong International.

With the construction of the dam the conditions for the transit of bigger ships to the ports at the city of Chongqing were finally met. The Chongqing Guoyuan Port is located approximately 1,500 kilometers away from the Pacific Ocean. Now, due to the increased water level, it can be entered by merchant ships coming from the Pacific with a load capacity of up to 5,000 tdw all year round. In addition to the huge inland port of Guoyuan, Chongqing is also home to the first inland customs port in China: the customs port of Chongqing Lianglu-Cuntan now handles more than 1,000 freight containers each day for export.

For comparison, the largest inland port in Europe, the port of Duisburg, is only around 200 km away from the ocean. The over-all handling at all ports in Duisburg, including all private ports, amounted to 133 million tonnes in 2016. The all-over handling at Chongqing Guoyuan alone has already been reported to be 124 million tonnes in 2012; more recent figures are expected to be much higher, as the port was not completed until 2015.

With the Chongqing Liangjiang New Area, China is building a logistics hub of gigantic proportions, far from the Pacific. It combines water, rail, road and air to the extent that we cannot even anticipate in Europe. In addition to the large logistics areas on the coast, Liangjiang New Area will be another important center of commerce, especially with Europe. A precondition for connecting the waterway with the Pacific was, however, the construction of the dam.

But what else would you expect from a logistics center serving the largest city in the world, which Chongqing is thought to be, at least judging by its administration? The metropolitan region of Chongqing, with all its suburbs, covers the area of Austria and is home to a population of 32 million people. For years, it has achieved the highest GDP growth in all of China. It is the mega-city par excellence. Now it receives a mega logistics hub by mega dam. The Chinese just love building big! 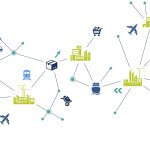 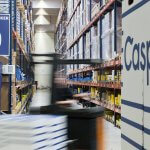