Autonomous driving is one of the trends of the mobility of the future. DB Schenker, the commercial vehicle manufacturer MAN and the Fresenius University of Applied Sciences have created a world first: On June 25th, 2018, they began the world’s first-ever full deployment of electronically coupled trucks. At 11:30 a.m. on the dot, the first platoon joined the A9 highway in Neufahrn near Munich, driven by professional drivers. 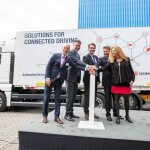 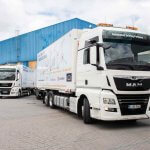 Departure for the use in everyday life – in the presence of the Federal Minister of Transportation Andreas Scheuer. © Deutsche Bahn AG/ MAN / Wolfgang Groeger-Meier Vehicles within the platoon are electronically connected with each other via car-to-car communication. However, the driver always keeps his hands on the wheel. © Deutsche Bahn AG/ MAN / Wolfgang Groeger-Meier

“The first-ever use of truck platooning in Germany sets new standards in the logistics market, which will benefit our customers, above all,” says Alexander Doll, the DB management board member overseeing the Freight Transport and Logistics divisions. Alongside representatives from the partners MAN and the Fresenius University of Applied Sciences, the event was also attended by Dr. Andreas Scheuer and Prof. Dr. Sabina Jeschke, the DB management board member who heads up the Digitalization and Technology division.

Many benefits of the convoy

The platoons consist of trucks which are digitally connected using driver assistance and steering systems and are able to drive very closely behind one another. Vehicles within the platoon are electronically connected with each other via car-to-car communication. This provides several advantages. Platoons reduce fuel consumption because the rear vehicle travels in the slipstream of the vehicle in front. As a result of the electronic steering, they increase the safety of the entire platoon and harmonize the flow of traffic. And the minimal gaps between the vehicles means that they take up less space on the highway.

Since June 25th, 2018, DB Schenker has been road testing the technology in real traffic. Unlike international projects of this kind, professional truck drivers rather than test drivers are behind the wheel. Following the initial test drives, DB Schenker will already be adding real freight in Munich this coming August as well in order to transport it to the DB Schenker’s Nuremberg branch. Vehicles will travel back and forth between the two DB Schenker logistics centers four times a day.
“It’s not simply a case of using a technology. It’s about beneficially integrating that technology into the whole logistics chain. The findings from the entire project are an important step towards serial development,” says Joachim Drees, chairman of the MAN Truck & Bus AG management board. “MAN is therefore taking a leading role in the automatization and digitalization of commercial vehicles.”

“The daily use of digital technology in the logistics sector: Truck platooning on the A9 is a milestone on the way towards autonomous driving. Those involved: #DBSchenker, #MAN_Group and #HS_Fresenius“

A wealth of data for the human-machine interface

The platoon is proving to be huge source of data. “On each journey between Munich and Nuremberg we gain more than 100 billion data points just from the analysis of the driver alone,” explains Prof. Dr. Christian Haas, Head of the Institute for Complex Systems Research at the Fresenius University of Applied Sciences. These data points are then evaluated and deliver important insights about the drivers. The Fresenius University of Applied Sciences is providing scientific support to the project.

MAN, Fresenius University of Applied Sciences and DB Schenker are cooperating in pushing platooning. Learn about the goals and next steps of the project.

It is examining the psychosocial and neurophysiological effects of the platoon upon the drivers.

As part of this, the drivers wear special caps which measure brain activities with the aid of 32 electrodes. Special glasses analyze the gaze of the drivers. “It is clear that the digitalization of the mobility and transport system is leading to entirely new requirements for those working in the sector,” says Haas. “We hope that our findings can also contribute towards a better understanding and designing of other digitalized human-machine interfaces.”
After all, semi-automated driving in which a person still remains present will also take place in the coming years. Even where full automation exists, people should still be able in the future to maintain control and to intervene if in doubt.

That’s how it works !