Driving in the platoon – this is how it works

The future belongs to automated driving. Especially with general cargo transport and over long distances, platooning – the electronic coupling of trucks – is an excellent way to control transport more efficiently and save fuel. But how does platooning work? What is the human/machine relationship? What does automation do to the driver? The team from Logistik aktuell has experienced platooning live.

July 3, 2018, 1:20 p.m.
Southeast of Berlin, the new BER Airport stretches. Luckily, it is not yet in operation, because otherwise a test drive in platooning, the automated convoy driving, would be impossible. After arriving at BER, we, the team from logistik aktuell and other journalists, are introduced to the project. DB Schenker, the commercial vehicle manufacturer MAN, and the Hochschule Fresenius have initiated a world premiere. At the end of June, they launched the world’s first use of platoons in real operation. All vehicles in the platoon are linked to each other by an electronic “drawbar”. After the introduction, we’re off to the starting point on the runway.

DB Schenker, the commercial vehicle manufacturer MAN and the Fresenius University of Applied Sciences have put truck platoons into full operation for the first time in the world.

1:50 p.m.
We get into the driver’s cabin of the MAN truck. We buckle up in the comfortable seats. The driver’s name is Tito Tang and he’s a developer at MAN Truck & Bus – he knows every detail in the platoon system. By pressing a button he starts the engine. Shortly thereafter, the heavy vehicle is set in motion and follows the guide truck. Platooning means the two vehicles are connected electronically via car-to-car communication. They have all the necessary control elements for an electronic connection. Sensors, cameras, and transmission technology turn two trucks into one. The vehicle in front controls the rear vehicle.

1:53 p.m.
The truck in front has reached the 60 km/h cruising speed. The driver Tang pushes a button on the display and thereby sets the coupling request to the front vehicle. This process takes only a few seconds, then comes the electronic confirmation. Tang takes his foot from the gas pedal. We are now a platoon! The heavy vehicle pulls up and approaches the guide truck within 15 meters. If the front truck brakes, accelerates, or avoids an obstacle, this information is then transmitted in real time via WLAN to the rear vehicle.

1:54 p.m.
Outside, the BER rushes past, before us the stern of our platoon guide truck gleams in the sun. Our driver keeps both hands on the steering wheel. In theory, any number of vehicles could be coupled. But traffic on Germany’s highways is dense. So, platoons will likely be formed by up to five trucks. 15 meters distance to the vehicle ahead is not much. Therefore, the system responds in fractions of a second. Because it triggers the brake command much faster than a human driver, automated driving ensures greater safety in traffic.

“On board a platoon: DB #Schenker, #MAN_Group, and the #Hochschule #Fresenius investigate the human/machine relationship in platooning.“

1:55 p.m.
Soon the runway ends. After nearly two kilometers, Tang presses the button to disconnect the platoon. The truck slows down. The rear of the truck in front of us is moving away. It will be a similar situation if another vehicle pushes into the narrow space between the trucks: Different sensors recognize the merging vehicle. Then the platoon disconnects. The rear vehicle falls back and is controlled by the driver at a safe distance.

MAN, Fresenius University of Applied Sciences and DB Schenker are cooperating in pushing platooning. Learn about the goals and next steps of the project.

1:57 p.m.
Having arrived at the destination, we get out. Andy Kipping is already waiting there. He is one of ten drivers that DB Schenker has selected for real operation. He has been a truck driver for nine years and is currently completing a two-month training course at MAN. So that he gets familiar with the intricacies of automated driving.
On his head he wears a cap with sensors that determine whether he is fatigued or concentrating on the road. The Hochschule Fresenius evaluates how the drivers react to the automated process. By looking through special glasses, the researchers also see where the driver is looking. By the beginning of 2019, the first findings on the relationship between human and machine will be available. Andy Kipping, who takes up regular operation with real cargo in August, is already excited. “It’s really fascinating for me to take part here and now in the driving of the future.” 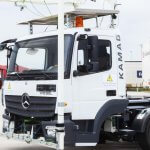 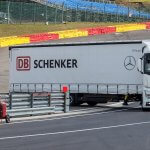