What would Frankfurt be without its airport? As a logistics hub, it is the number one in Europe: with approximately 2.2 million tons, Frankfurt Airport has the largest cargo volume of all European airports and the eighth highest in the world. Regarding passenger traffic, it is the fourth largest airport in Europe, after London Heathrow, Paris Charles de Gaulle and Amsterdam Schiphol. With the construction of Terminal 3, Frankfurt is now getting ready to handle even more passenger traffic.
What is the new terminal supposed to do? What will it cost? How is the construction work coming along? Let’s have a look at this huge infrastructure project!

Most modern terminal in Europe

Since the groundbreaking ceremony in October 2015, Fraport has been building Terminal 3, the most modern terminal in Europe. Commissioning is planned for 2023. It will provide an annual capacity for up to 14 million passengers. This is also necessary, as Fraport’s forecast for 2023 showed an increase in passengers of 8 million, from the current 64 to 72 million passengers per year.

Paris is expanding its public transport network with infrastructural power. The investment is supposed to save the French capital from a traffic collapse.

In addition to a new parking garage with parking guidance system, the new terminal with its two piers also requires a passenger transport system, in addition to the existing Sky Line tram. From Terminal 1 to Terminal 3, the journey, with a short stop at Terminal 2, will take only eight minutes.

In the finished terminal building, intelligent technology will ensure particularly careful use of resources. Through various heat recovery measures, the building is unlikely to require externally added heating energy. Because of the efficient design, the waste heat, which emanates from technical equipment and systems, can be used as heating energy.

The architectural center will be the “marketplace” that will offer a lot of space for retail and gastronomy on 6,000 square meters. In addition, an adjoining lounge area will provide leisure and recreation space for travelers – including an unobstructed view of the runway.

The civil engineering works are already in full swing since the summer of 2017. Last summer, the groundwater was pumped out of the sealed pit, cleaned and returned to the groundwater. As the foundation was constructed below the groundwater level, much work had to be carried out underwater. For example, a concrete trough for the building was built in order to protect the finished terminal from the groundwater. It was also during last summer that the concrete tub was pumped dry.

In addition, the decision was made in March in favor for the system provider of the new passenger transport system. The first choice was the bidding consortium consisting of Siemens, Max Bögl and Keolis. The new system will complement the existing Sky Line train and, of course, will be automated, i.e. driverless, and run up to 80 kilometers per hour.

• 14 million travelers will be able to fly from Terminal 3 each year
• 2 new piers with a total length of 1,000 meters
• Terminal 3 offers 24 gate positions, onto which even the most modern widebody aircraft can dock
• 90,000 m² of floor space – equivalent to around 13 soccer fields
• 306,000 m² total area – take all five upper and lower floors together
• There will be 100 check-in desks at the new Terminal 3
• 10 baggage output belts are part of the new baggage system that connects Terminal 3 to existing terminals

Ship elevator completes Three Gorges Dam. What does it do for China’s hinterland?

The “ghost port” of Qingdao is starting operations 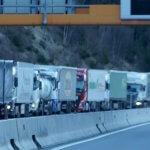