131 tonnes on the highway! Normally, the maximum weight for a truck on German roads is 40 tons. In Combined Transport it may be 44. And suddenly, there are 131 tons on a DB Schenker truck travelling 800 kilometers through the Republic! Of course with regulatory approval.

131 tonnes: cargo plus vehicle. It’s like stacking three trucks with the maximum allowed weight and splitting everything into 12 axles. No wonder that bridges had to be blocked so that this truck could cross them. “It does not make drivers happy when the stop signal from the police lights up right in front of their noses at night, because we claim the road for ourselves”, says Peter Geyer, Head of Special Transport, DB Schenker Munich. But most of them ultimately understand. Because we are not doing this just for fun. And after a few minutes – maybe 30 – the journey continues for everyone.

Heavy transport: with 100 tons through the bottleneck | logistik aktuell

Heavy loads on the road have to overcome many bottlenecks. All a question of the right planning. Digitization has produced useful helpers.

Every three years, the grounds around Messe München are transformed into a huge and well-planned construction site. It’s time for BAUMA. From April 8 to 14, 2019, the suppliers of construction, building and mining machines, construction vehicles and equipment will meet for their world’s largest industry event. The organizers are expecting roughly 600,000 visitors this time. In 2016, there were 585,000 from 219 countries.

This fair was the destination of this heavy transport. It started in Porta Westfalica (East Westphalia), where the Masa Group maintains a plant. The company, which specializes in machines for the building materials industry, exhibits concrete block production machines on a 740 square meter BAUMA stand. This includes a hermetic plate press, which DB Schenker delivered on 23 March on the spot. In the Westfalenland people call huge objects and men admiringly “Kawenzmann”. This 65 tons colossus is definitely one.

“A truck that cannot be overtaken”

The biggest challenge for transport did not come from the impressive overall weight. The length of almost 32 meters – at least 7 meters more above the long truck – presented the experienced driver not with major challenges. “The width of 4.75 meters was more problematic,” explains Mico Vrsajkovic (Head of Engineering, DB Schenker Munich). This is nearly twice as wide as a normal truck, which brings it to a maximum of 2.55 meters. Once in a while you hear on the radio of oversized heavy transports on the highway. In most cases with the addition: “That cannot be overtaken.” This was one of them. Especially with narrow motorway accesses you realize that almost 5 meters are quite a lot.

“We do not have a 4.75 meter wide heavy transport every day.”

For two nights, the vehicle combination of tractor and flatbed was on the way. With police escort. Authorities usually approve such transports only for the time between 22 pm and 6 am. Afterwards they clear the road, and the driver and the attendants take a break. 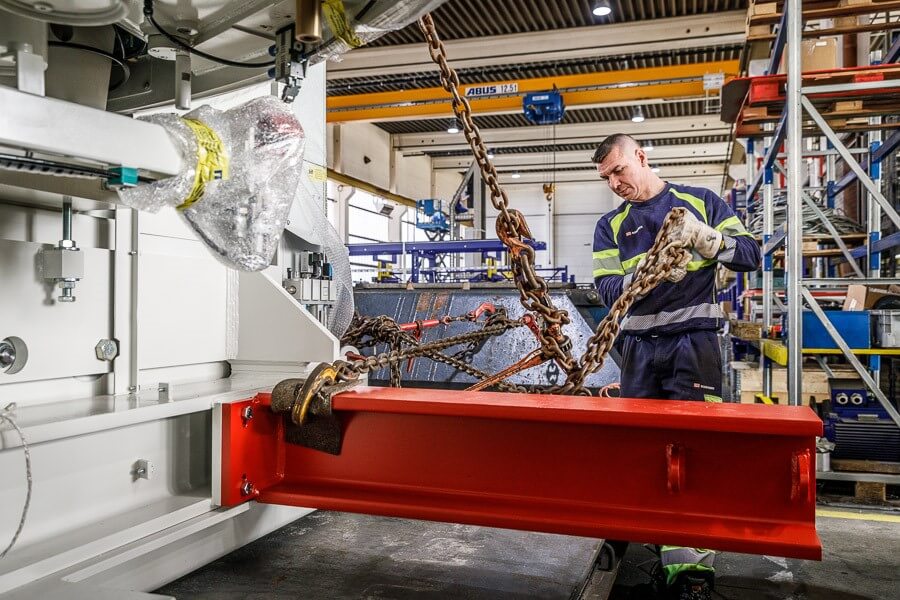 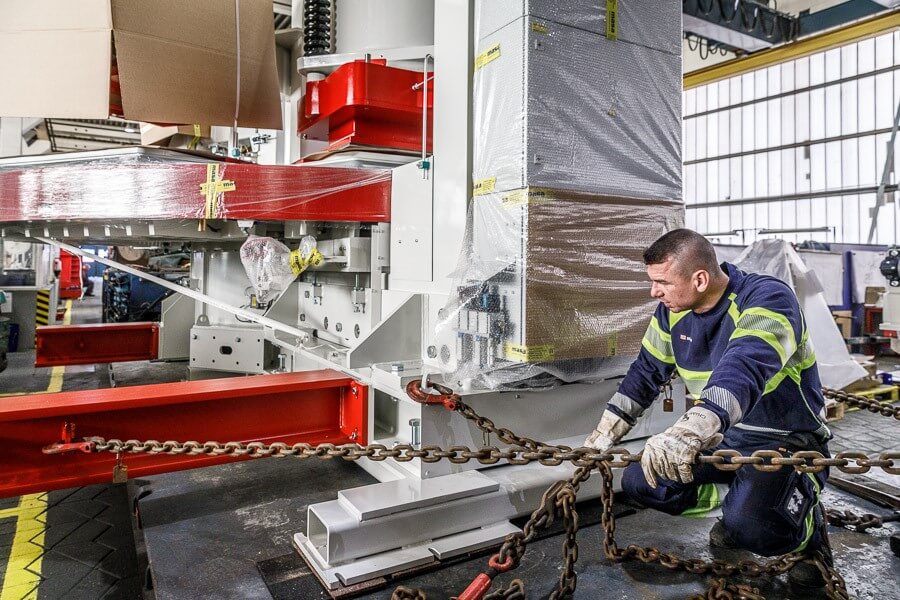 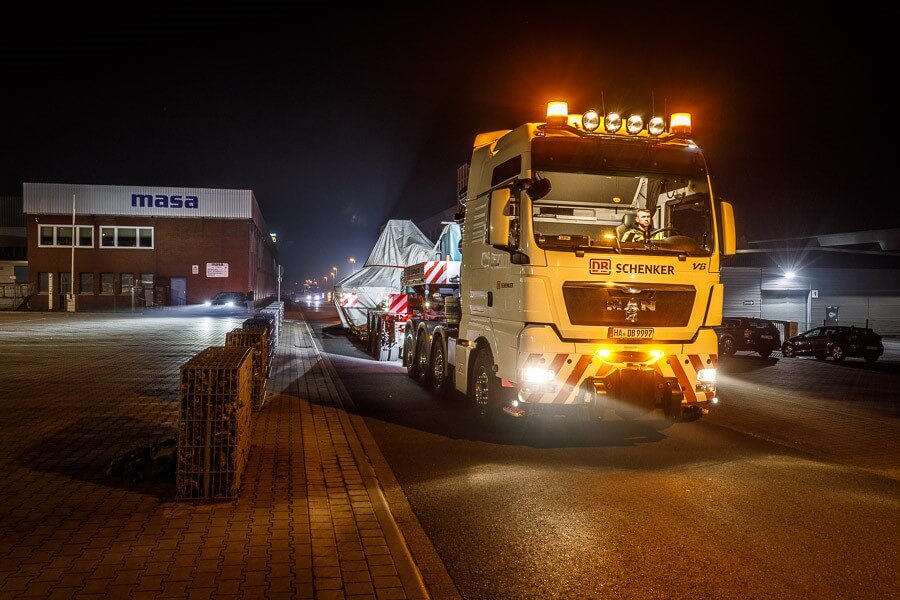 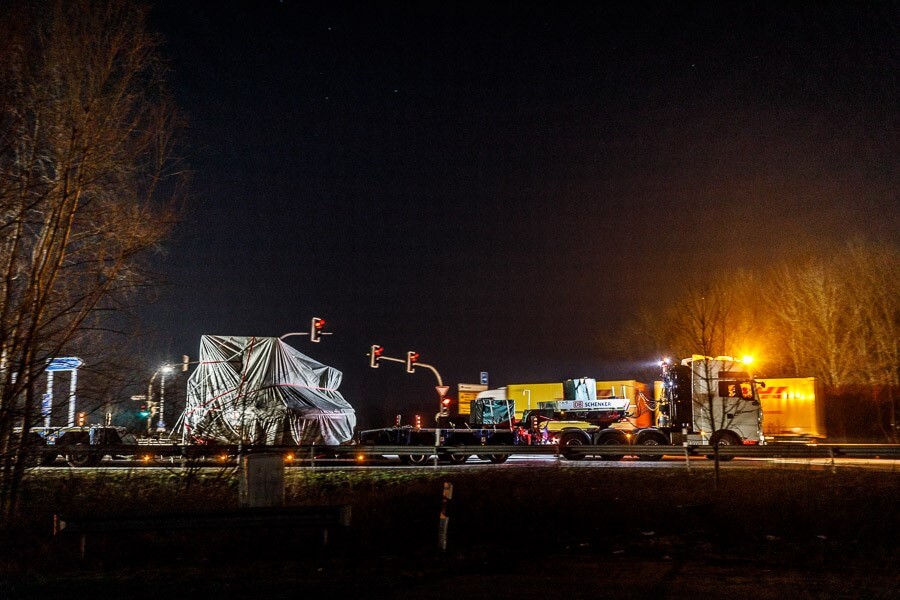 Sometimes it only goes on at walking pace. © Michael Neuhaus / DB Schenker

It became really tight when entering the exhibition hall. Because the gate is only 5 centimeters wider than the massive load of iron and steel. At the narrowest point you could fit just about a double CD right and left. Really tight. But the experienced driver knows this and can handle such tricky situations. This was followed by the unloading with a 220-ton crane and an 80-tonne crane in a tandem hub. Nothing for the faint-hearted. In the end, the cargo, trucks and all everybody involved survived the transport undamaged. “Somehow it’s all routine,” says Vrsajkovic. “But it’s exciting every time, because no heavy transport is like the other.” The jobs in general cargo are easier. Or more boring.

“# Bridge blocking due to heavy transport. It’s routine for the specialists at DB #Schenker. “

After the end of the fair, the routine continues. After all, the hermetic plate press has to go back to Porta Westfalica. 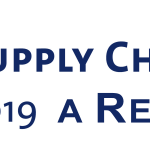 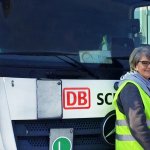 Nancy Polomsky and her 12-Tonner »