Innovative procedures in land transport: DB Schenker and its partners have successfully completed the first comprehensive pilot project on truck platooning. For nearly a year, the logistics specialist tested platooning in everyday operations with MAN Truck & Bus SE and the Fresenius University of Applied Sciences. Platoon is the name given to a vehicle system in which trucks on the highway drive very closely together with the aid of digital driver assistance and control systems in order to save fuel and relieve the driver. The special MAN trucks from DB Schenker have covered 35,000 kilometers of road in one year.

“During the project, the drivers quickly realized that the system works well and makes driving more relaxed.”

The test results show that the technology works and meets the expectations for more safety, more sustainability and higher efficiency. “With platooning, we can offer even more reliable and efficient transports,” said Alexander Doll, Chief Financial Officer, Freight and Logistics of Deutsche Bahn, at the presentation of the test results in the Federal Ministry of Transport. Joachim Drees, Chairman of the Board of Management of MAN Truck & Bus SE, added: “The system works reliably and can increase safety on the highway. Platooning is therefore an important step for us on the way to automation.”

The drivers adopt the technology

In addition to the technical aspects, the pilot experiment also had a social component. The University of Fresenius examined the psychosocial and neurophysiological effects on the drivers. It has been found that platoon driving is widely accepted by professional truck drivers. The live experience caused a significant change in the previously partly critical attitude of the drivers. “The drivers expected a series of negative scenarios such as accidents, reduced response times and other very stressful situations prior to the pilot test. But during the project, they quickly realized that the system works well and makes driving more relaxed,” said Prof. Dr. med. Sabine Hammer from the Institute for Complex Systems Research at the Hochschule Fresenius. “There was no situation that they described as uncontrollable.” As unpleasant, they perceived mostly merging vehicles from other road users.

Driving in the platoon - this is how it works | logistik aktuell

How does automated driving work? What is the human/machine relationship in platooning? DB Schenker invites you to take a ride in the cockpit of an 18-ton truck.

40 percent of the general cargo network is suitable for platooning

After completing the pilot phase, the automakers and Deutsche Bahn want to further develop the subject. What helps DB Schenker is the fact that around a quarter of the connections in the general cargo network are operated several times a day. This would allow 40 percent of the miles driven to be used for platooning. It is possible, for example, to integrate the technology gradually into real traffic. But before truck platoons can drive on German roads, many conditions have to be met. These include, among others, toll concessions for more efficient platooning trucks, a more flexible driving and rest time for drivers who ride in the platoon or start-up financing for the purchase of the first truck. In addition, the technology must quickly be brought to series production maturity and the vehicles must receive corresponding approvals and road permits.

“#Platooning with a future: 40 percent of the general cargo network of DB Schenker is platoon-capable. #DBSchenker, #MAN_Group and #HS_Fresenius successfully complete pilot project. but how does it continue?“

The drivers who participated in the pilot for DB Schenker have now returned to regular service. “That was really a great experience,” says Andy Kipping, who drove several months on the Munich-Nuremberg route. He would immediately go back to driving in a platoon. 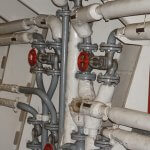 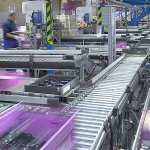 Follow the path of the customer. Automotive logistics at the Eching location »