At DB Schenker, much is being developed and tested in the field of digitization, preferably in our own Enterprise Lab. Ideas are becoming concrete pilot projects. Now, digital technology has made it into the workday of DB Schenker employees: At the logistics center in Bremen, employees have been working with Google Glasses since May 2019. At the Rodgau site, the launch of a similar pilot project for the use of AR glasses is imminent, and a similar pilot project is being prepared at location in Hannover. DB Schenker calls it Smart Picking. How convincing is the pick-by-vision technology for employees during the pilot project in Bremen?

Pick-by-vision is the support of order pickers in warehouse logistics through visual information. Data glasses project the information required into the field of view. In Bremen and Rodgau, DB Schenker relies on Picavi, in Hannover on Ubimax. Both pick-by-vision vendors use hardware from Google Glass.

Hands-Free Picking was our stated goal, and we achieved that with smart picking.

The ultimate goal of the pilot project was that the warehouse workers no longer rely on their hand-held scanners, which were previously the central tool in the picking process. These scanners not scan the goods, but also provide information on their displays about the current orders. But handhelds have to be held in hands, as the name implies. There is no paper list necessary, but you still don’t have your hands free.

What is Smart Picking?

With the solution from Picavi, DB Schenker has divided the hand scanner into two wearables, the display being the glasses and the scanner being the finger ring. But, strictly speaking, the employee wearing the devices does not yet move in Augmented Reality. Because the camera on the AR glasses is simply used as a miniaturized computer. That’s why its use is also harmless, as far as privacy is concerned, since no camera records.

An AR support is not necessary to implement hands-free picking. After the pick, which is recorded by the ring scanner, the next pick order is automatically displayed. To read information about the pick order, the user simply looks up slightly. However, his normal field of vision remains free of flashes. The user can interact via menus by pressing five large, robust buttons on the battery pack (even with gloves).

This so-called power control by Picavi weighs 200 grams, is attached to a belt and supplies power to the glasses for a full working shift. The glasses including their CPU weigh 42 grams, which is about the weight of regular glasses. The glasses use the same interface to the warehouse management system as the handheld scanner. The information provided can be user-centered and optimized for presentation on the AR glasses.

The workflow is accelerated by omitting process steps, such as ‘picking up and putting down the scanner’, which is clearly shown by the MTM analyzes. But Detlef Protzmann considers another effect: “Much more important than the expected increase in the working speed is that our employees can now access all necessary information at any time, without having to interrupt their workflow. This eliminates a potentially annoying factor caused by fiddling with the scanner display. A quick glance upwards is enough to make sure that you are moving in the right aisle, for example. You will not be torn out of your personal workflow.”

Such phenomena are also known from driving a car. There, the handling of the center console takes away attention and tears out the driver from the flow of driving. The generated stress moment is much higher than the short handle suggests.

How do the employees handle the new tool?

In order to get more information about the experiences of the employees, they were and are interviewed in cooperation with the University of Koblenz-Landau, before and after the introduction of the new tool. 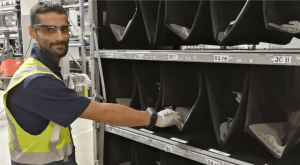 All technology is worn by the employee on the body allowing him to concentrate on the actual picking process. In the picture, in addition to the ring scanner on his finger, the employee also wears an RFID wristband from the pick-by-vision provider Ubimax, with which DB Schenker is carrying out the pilot project at the logistics location in Hanover. © DB Schenker

A crucial factor for the acceptance of digitization in the workplace is a proper training by someone who also helps with problems that only occur in everyday working life. This has also proved to be successful with regard to the AR glasses: “There was a training-on-the-job by a trainer who accompanied the employees in their daily work, rather than a one-time training next door. The trainer was able to help in a concrete way, for example, when an employee accidentally navigated a wrong menu and did not find his way back. Only in this way can reservations against new technologies be permanently reduced,” says Detlef Protzmann.

And what do employees think about the use of AR glasses? Detlef Protzmann: “Most people see it as a real relief for their work and it makes many, of course, a little bit proud to work with the latest technology: If the son can tell at school that his dad works with a Google Glass, then this can make a real impression,” says Detlef Protzmann. “Hands-free picking was our declared goal and we achieved that with Smart Picking”.

Will Augmented Reality change the world of work? 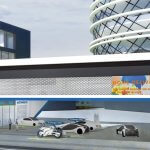 Logistics next to the gas pump: the gas station of the future « 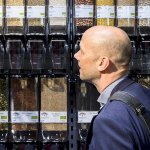 Anuga: The Masterpiece of every exhibition logistics company (Part 2) »