Air freight means speed – that’s the idea. And because these days things usually have to go faster and faster, air freight is experiencing rapid growth as well. But the idea of high speed applies only as long as the cargo is in the air. On the ground, however, other laws prevail that clever logisticians have to master. Especially in the most urgent time of the year, at the year’s end. “The speed at which air freight is handled always depends on many different factors. This is a combination of many aspects that we as a logistics service provider can only influence to a limited extent,” says Gabriel Akman, who works for DB Schenker Flight Services in Cargo City South at Frankfurt Airport. “Certainly before Christmas there’s really a lot going on because the goods have to go to the shops and to the end consumers.” That means a whole lot of work for the whole team at DB Schenker.

“Before Christmas there’s really a lot going on.”

In the import hub, air freight shipments for industry and trade from around the world are bundled, temporarily stored and processed for further transport. Customers mostly rely on fast air freight because their goods have short product cycles. Transport by ocean-going ship from Asia to Europe takes eight to nine weeks – too much for the rapidly changing market.
Transhipment at the Airfreight Hub at the airport is organized according to destination countries. 14 employees take care of the various countries. Destinations with high freight volumes such as England, Italy, Poland, Switzerland, Lithuania and the Czech Republic have their own teams.

Akman is part of the four-person Czech team. They monitor and handle incoming air freight for the Czech Republic. Not an easy task, because most of the customers who are supplied by DB Schenker in Prague are top-class high-tech companies with the highest quality standards. When the customer in the Czech Republic sees on the screen that a plane with his cargo has landed in Frankfurt, he becomes impatient and wants to be able to receive the goods immediately at his loading dock.
How quickly freight is dispatched depends on the service level agreement that DB Schenker has with the customer. Clearance can take between six and 24 hours. “If the plane arrives by 1 p.m., the freight usually goes out on the same day,” says Akman.

The processes in Frankfurt am Main are well-established and routinized. Loose shipments take more time than bundled freight. After the aircraft has landed, the handling agents check the freight on board, while DB Schenker provides the documentation. The goods are then transferred to the DB Schenker warehouse. Now Akman’s team can check the goods for completeness and condition and then inform their colleagues in the Czech Republic that the freight has arrived properly and in full. The Praguers order trucks using their own trucking department and relay the arrival time to Frankfurt. Then when the driver reports to the desk at the Airfreight Hub, the goods and accompanying documents must be ready.

The peak at year’s end

“Business is relatively balanced over the year,” says Akman. It first gets hectic in autumn, when manufacturers present their new products. “Then a lot of material arrives in Frankfurt that has to be transported immediately.” Before Christmas, the throughput volume rises again sharply. During Boxing Week, on the other hand, i.e. between Christmas and New Year, it is much quieter.

“Air freight at the end of the year: Gabriel Akman from DB Schenker Flight Services maintains the supply chain even over the holidays. #DBSchenker @logistikaktuell #airfreight“

Akman is twice as excited this year. Because he just got married, he can stay home for the Christmas holidays and the New Year. “That’s when the younger and unmarried colleagues come into the office,” says Akman. 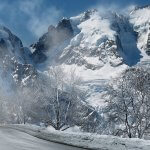 How logistics tackles snow and ice « 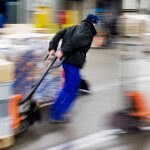